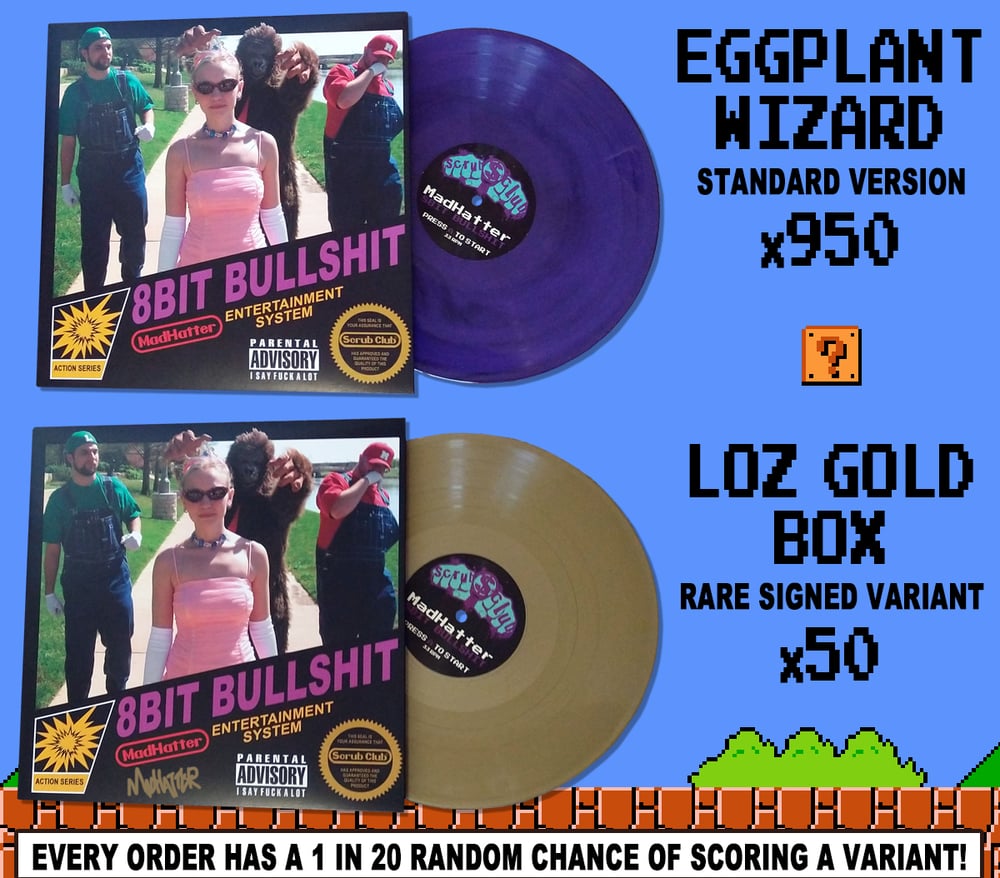 The Scrub Club Collective and Surrender to the Sound Records proudly present MadHatter's "8Bit Bullshit," fully remastered and on vinyl for the very first time! We really went all out for the 13th anniversary of this legendary Nerdcore classic.

There are 11 Hip-Hop tracks full of nonstop NES memories to bob your head to. It features the actual in-game music ripped out, remixed, and given fresh new beats by Hatter himself. The instrumentals alone will have you grinning, but the lyrics explore the story and characters of each game in ways that true Nintendo nerds will squeal about.

Bonus round! Just for purchasing, you also have a 1 in 20 chance of randomly receiving a rare SIGNED copy with an exclusive "LOZ Gold Box" variant coloured vinyl instead of the standard edition!

Instrumentals and vocals by MadHatter, featuring Shelshocker on "Unstoppable."
Some samples taken from a few of the incredible NES-era games of Nintendo.
Remastered by Jarno Alho of Alho Audio Mastering in Tampere, Finland.

This is a bass-heavy record produced on modern vinyl presses, which requires a decent turntable for playback. Cheap, non-adjustable record players from brands like Crosley, Pyle, Sylvania, etc. may skip repeatedly because their stylus pressure is way too heavy.

Hatter recommends a tone arm set to 2 grams of pressure with a matching anti-skate setting, which plays perfectly on his mid-range Audio-Technica.

Return or exchange is not available for poor playback that occurs on low-end equipment or turntables that do not have a balanced tone arm for adjustable stylus pressure.

For wholesale prices (minimum orders of 10pcs) and questions, email us at contact@surrenderrecords.com